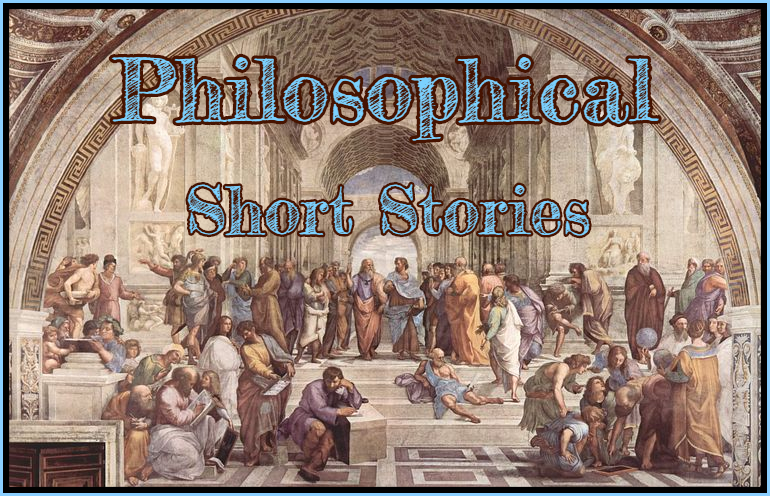 Characters in these stories have a philosophical interest, they talk about philosophical topics, the story illustrates a particular philosophical point of view, or a character offers advice for living. See also:

The Ones Who Walk Away From Omelas | Ursula K. Le Guin

The citizens of Omelas are happy, but the narrator is vague as to what exactly they have which makes them so. However, the people’s happiness depends on one thing, which all the citizens are aware of.

This story illustrates a moral dilemma based on William James’s pragmatism.

“The Ones Who Walk Away From Omelas” is the third story in the Amazon preview of The Penguin Book of the Modern American Short Story.

The Ones Who Stay and Fight by N. K. Jemisin

It’s the Day of Good Birds in the city of Um-Helat, where everyone is happy. Decorations of feathers and wings are seen all over. The beliefs of the citizens vary, and all are honored. They speak many languages and have various backgrounds. They all care for each other. They know what needs to be done to make the world a better place, and they’re practical enough to do it.

This story parallels “The One Who Walk Away From Omelas”.

It is the first story in the preview of How Long ‘Til Black Future Month? (25% into preview)

Happily Ever After | Aldous Huxley

Jacobsen travels from Chicago to Wiltshire, in England, in the fourth year of the war to see his old tutor, Alfred Petherton. The old man is delighted to see Jacobsen and flattered that he’s come. Rather than having genuine affection for people, Jacobsen seems more amused by their mediocrity. Eventually, they get news that the fiance of Petherton’s daughter will be visiting on his leave, as well as another young friend of his.

This story can be read in the preview of Collected Short Stories. (Paperback preview, then select Kindle sample)

Doctor Parcival has been in Winesburg about five years but his practice is still very small. He wants it that way. He has plenty of money. He tells George Willard his personal history. He was a reporter and a minister and came from a troubled family.

This story can be read in the preview of Collected Stories.

At a dinner party, an intoxicated man steps into the host’s kitchen where the host’s seventeen-year-old daughter engages him in a conversation about a post-apocalyptic world.

This is the first story in the preview of The Lottery and Other Stories.

A dying man dreams he is in a valley and finds a concealed bronze gate. He wants to know what’s on the other side, but future dreams give him contradictory answers.

This story has the philosophical message that nothingness is better than life, possibly based on some of the work of Schopenhauer.

“The Spinoza of Market Street” by Isaac Bashevis Singer

Dr. Fichelson, a philosopher, lives by the rationalist teachings of Spinoza. He lives on a small income after being fired from his post as librarian at a synagogue, due to his views, which contradict Jewish doctrine.

Some of this story can be read in the preview of The Spinoza of Market Street and Other Stories.

“The Egg” by Andy Weir

You’re killed in a car accident on your way home. You’re concerned about the family you’re leaving behind, which the narrator tells you is what he likes to see. It turns out you’re going to be reincarnated. (Summary & Analysis)

The McArdle family returns to America on a luxury liner after a tour of Great Britain. The ten-year-old son, “Teddy”, has been interviewed by professors for his mystical and philosophical inclinations. He ignores the direction of his father. He’s sent to find his sister, Booper, who has her father’s expensive camera.

The narrator is losing interest in people and books. She prefers to lie under a maple tree at night and think.

This is a very short story.

A German spy knows that his cover has been blown and he’s being pursued by English authorities. He has vital information to communicate to his government, so he comes up with a plan: he finds a man named Stephen Albert in the phone book and heads for his home.

Dante and the Lobster | Samuel Beckett

Before visiting his aunt for supper, a man goes about his daily errands. He brings lobster with him, but is surprised that it’s still alive.

This story asserts the futility and meaninglessness of life.

Read “Dante and the Lobster”

A king wants the answers to three very important questions. He finds a wise hermit who helps him discover the answers.

This is a parable that offers a philosophy for living.

After the death of the woman he loves, the narrator begins visiting her father. The father claims there’s a point in his cellar, an aleph, which contains all other points in space.

This deals with the concept of infinity.

The narrator’s universe is a room containing every possible book. Most of them are complete nonsense, but it must also contain all the world’s wisdom and accurate prophecy.

A doctor experiences several surreal events when he’s called out during a winter’s night to treat a sick man.

This story can be read as an argument for existentialism.

Pablo is accused of being a war criminal. He is held in a cell with two other men. They are all informed they will be executed. They each deal with the news differently.

The narrator goes to a hotel to recover from a bout of influenza, the same hotel he stayed in the previous year for a similar recovery. On the letter-board, he sees an undelivered letter that he had written to A. V. Laider, a man he had talked to last time. He remembers the tragic story that moved him to write to Laider.

This story discusses faith and reason, and fate and free will.

Memnon decides to become a great philosopher by rejecting all passions including love, intemperance, and quarreling.

The narrator learns of an encyclopedia entry on a country called Uqbar, but the entry doesn’t appear in all copies of the volume. He tries to locate more information about this country.

Among other things, this story shows a world where George Berkeley’s idealism is common sense and materialism is viewed as paradoxical.

The narrator buys Galveston, Texas with the intention of creating a utopian society. He thought it would be easy to make the citizens happy, but finds that no matter what he does someone is upset about it.

A parent has promised to tell the children the “Important Things” in life. The parent puts it off until the kids are older and then tells them, but the kids aren’t impressed with the shared wisdom.

A man looks with amazement at a woman’s face on a train.

The narrator seems to be contemplating existence and existing things.

A professional baseball player is in a hitting slump. He tries to figure out what his problem is. He considers physical and philosophical reasons, and tries to work through it.

Kierkegaard experiments with various philosophies for living the best life. He writes a series of books for the residents of Copenhagen which they adopt as guides to happiness.

The narrator is in a car chase: he’s being pursued by an armed man in another car. They are separated by several cars, stopped at a traffic light. The narrator muses about their relative positions and his possible paths of escape.

A housewife and mother finds dead bugs everyday on her carpet. Eventually, she decides to examine the insects. At first, she’s disgusted by them, and only looks because they bring some disorder into her life. Later, she becomes genuinely curious about them.

This story looks at achieving the Platonic ideal.

The narrator lives in a confusing world where things are very literal. He or she (?) also feels an unfocused sense of grief. The arrival of the mailman opens the possibility of an experiment.

“The Man of Adamant” by Nathaniel Hawthorne

Richard Digby is a gloomy and intolerant man, with a pessimistic view of his fellows. He believes his personal philosophy is the true faith, so he decides to isolate himself. He sets out into the forest with some tools and his Bible. After walking three days, he comes upon a well-concealed cave. Digby is sure that he will be at peace here, away from the sins of others.

Read “The Man of Adamant”

Zoé and Lucien Bergeret, siblings, reminisce about Putois, the gardener from their childhood home. They recite a long list of features, seemingly word for word, from memory. Lucien’s daughter, Pauline, overhears and asks why they know this description by heart. They tell the story of this important figure, who, by the way, didn’t really exist.

This story looks at the human proclivity for inventing myths.