The Guys Read series is designed to appeal to young boys. Of course, girls will enjoy some of the stories as well. Each anthology has 10 stories written by many well known authors of children’s and young adult fiction. The links will take you to Amazon to see the price or to check out the preview. If you want to see the entire series together, click the following picture. 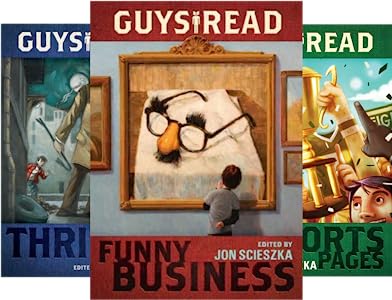 This is the first volume in the series, and has 10 stories. They’re all intended to be humorous to younger readers.

In the first story, “Best of Friends”, Ernest has trouble making friends. Dean talks to him sometimes, but Ernest always does something off-putting. One day, Ernest tells Dean something that has the potential to change his status.

I found this story somewhat funny, but I don’t know if it was for the same reason that a younger reader would. A lot of the story can be read in the Amazon preview.

In the second story, “Will”, a boy examines himself every day looking  for changes. So far, nothing has happened. Last week, there were only six kids left in his class—now there are only four. They get sent somewhere else as their new abilities emerge. The class gets an unexpected visitor.

This is the second volume. It has 10 stories of mystery, scares, thrills and weirdness.

In “Believing in Brooklyn”, Benny makes a wish on a drawing of a wishing machine that Ray came up with. He doesn’t believe in that kind of thing, but the wish comes true. He decides to test it again. When that one also comes true, he’s sure one of his friends or family members is fooling him.

In “The Double Eagle Has Landed”, the narrator explains how he ended up in a precarious situation. He lives with his older brother, Tim, in London. Tim is a private detective. One of his clients, Mr. Underwood, is a gold dealer. He’s in possession of a Double Eagle, a rare American gold coin worth millions. It’s well protected, but there’s a problem—his chief of security is planning to steal it.

The third volume in the series has 10 stories featuring various sports.

In “How I Won the World Series”, the narrator explains how he was responsible for the outcome of the 1986 World Series, even though he was just a kid at the time. This story can be read in the preview.

In “Find Your Fire”, best friends on the football team contend with the pressures of the game and differing economic backgrounds.

This fourth volume has 10 stories of science fiction and fantasy.

In “Percy Jackson and the Singer of Apollo”, a young demi-god is given a task by Apollo. One of his chryseae celedones, a golden backup singer, has run off. Apollo thinks Percy and his friend Grover are suited for the job. This story can be read in the preview.

In “Bouncing the Grinning Goat”, a hungry runaway poses as an Old Hollower to get a job as a bouncer. Unfortunately, the tavern has a rough clientele. Her resourcefulness is tested.

Guys Read goes nonfiction with the 10 stories in this fifth volume.

“Sahara Shipwreck” is the story of the Commerce, an American merchant ship that ran aground off the coast of West Africa in 1815. The crew found themselves in the Sahara desert, hungry, thirsty, overheated, and in danger from the local tribes.

Other entries cover growing up during wartime, hunting tarantulas in the Amazon, being left for dead in the Old West and canoeing in Alaska.

In “Mr. Shocky”, a boy saves his younger brother from falling from their treehouse. The younger boy says he was up there because of Mr. Shocky, a man who his older brother invented.

The seventh volume has 10 stories of heroes, villains, and those who blur the lines between the two.

In “The Villain’s Guide to Being a Hero”, the Bandit King has hit a rough patch—no one is paying attention to his misdeeds anymore. The League of Princes, a band of do-gooders, are getting all the headlines. He might give up villainy—unless he can find a job that can’t be ignored.