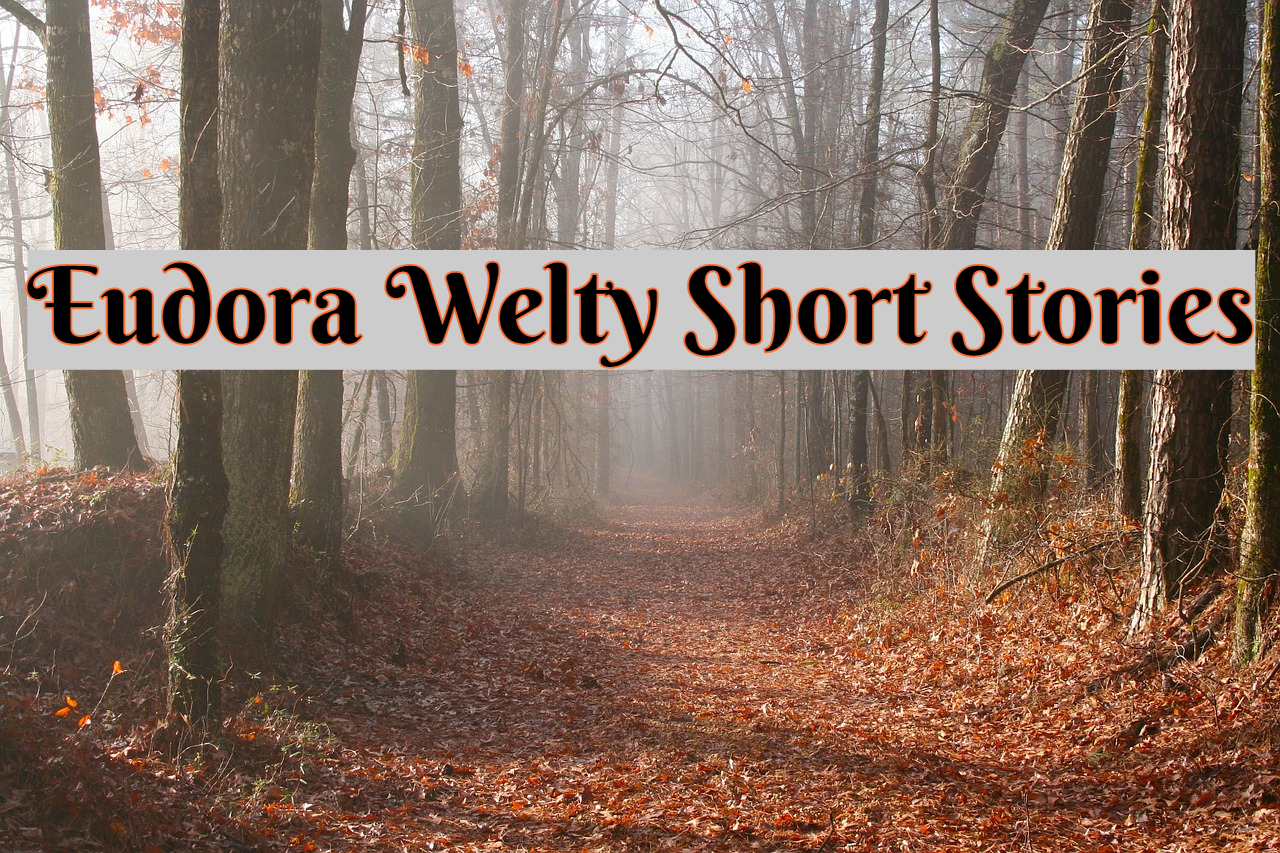 If you’re interested in a book, The Collected Stories of Eudora Welty, linked below, contains all 41 of her published stories.

“Lily Daw and the Three Ladies”

Mrs. Watts, Mrs. Carson, and Aimee Slocum are at the post office. A letter has arrived from the Ellisville Institute for the Feeble-Minded of Mississippi. A girl they’ve helped over the years, Lily Daw, has been accepted to Ellisville. She has grown up now and they’re concerned about her. They set out looking for her. It turns out that Lily has made some plans herself.

This story can be read in the preview of The Collected Stories of Eudora Welty. (17% in)

“A Piece of News”

Ruby comes in to her cabin out of the rain. She and her husband, Clyde, live in an isolated area. She hardly ever sees anyone else and is lonely. She has no T. V. or radio—the newspaper is her link to the outside. When she opens it up, she’s surprised to read her own name. Her imagination takes off.

This story can also be read in the above preview of The Collected Stories of Eudora Welty. (31% in)

In a beauty parlor, Leota gossips with her client, Mrs. Fletcher. They cover a lot of subjects including Leota’s boarders, the Pikes; Mrs. Fletcher’s pregnancy; and the traveling freak show in town, featuring the petrified man.

This story can also be read in the above preview of The Collected Stories of Eudora Welty. (39% in)

People wait in a remote train station at night. Insects can be heard but nothing else. No one talks. Ellie and Albert Morgan sit in silence, waiting with their old suitcase. A young, red-haired man stands by the wall. He has a key that he turns over and passes from hand to hand and tosses in the air and catches.

This story can also be read in the above preview of The Collected Stories of Eudora Welty. (58% in)

Little Lee Roy is sitting on his porch. His children are out picking plums. Two white men approach his place. One of them points to Lee Roy and asks if he’s the one. The younger of the two men is still talking excitedly. He used to sell tickets for a circus show—Keela, the Outcast Indian Maiden—where the subject would eat a live chicken.

This story can also be read in the above preview of The Collected Stories of Eudora Welty. (73% in)

“A Curtain of Green”

Mrs. Larkin is an elderly widow. She spends her days from morning until dark working in her garden, stopping only for lunch. Even in the rain she continues, moving to a sheltered spot. She is focused on planting whatever she can, and isolates herself from her community. Her neighbors don’t know what to make of her obsessive work.

An older couple, Jason and Sara, are sharecroppers working for Mr. Perkins. They lie in bed at night, Jason sleeping and Sara staring into the dark. It’s cold every night, and as the fire goes down it gets worse. They’re tired and poor. Sara thinks about the spring and summer, but it’s hard even to imagine it now. When freezing temperatures threaten to destroy the crop, Mr. Perkins blows a whistle to warn the farmers.

“Death of a Traveling Salesman”

R. J. Bowman, a traveling salesman for a shoe company, is back on the road after a bout of influenza. He’s still not feeling well. He’s also lost. He eventually drives to the edge of a ravine and can’t prevent his car from going over the edge. He gets out before it rolls down the bank. He starts heading for a house on a hill.

Read “Death of a Traveling Salesman”

The narrator recounts a day from her youth when she rested at a lake after a swim. She was thinking of a boy she secretly loved, remembering interactions they had. A family arrived at the lake, intruding on her reverie.

A group of girls gather at a week-long summer camp. Half are orphans and half are from families nearby. There’s a Boy Scout there as a lifeguard; he doesn’t want to be there but his mother insisted. The girls are getting swimming lessons.

One morning while having breakfast Eugene MacLain slaps his wife. He walks out of the kitchen, puts on his hat and coat, and leaves the apartment. He thinks about why he did it. He realizes suddenly that he isn’t going to go to work. He keeps on walking.

“A Visit of Charity”

A fourteen-year-old girl with a potted plant enters the Old Ladies’ Home. She’s a Campfire Girl and this visit with an old lady will earn her some points. A nurse leads her down the hall to a room. She leaves her there will two old ladies. The girl tries to navigate her way through the visit.

Read “A Visit of Charity”

“Where is the Voice Coming From?”

The narrator thinks he got the idea when he told his wife she didn’t have to look at or listen a black man on T.V. He could find out where that man lives. He finds the man’s place but he’s out. The narrator has to wait for him.

The narrator’s sister, Stella-Rondo, is coming back home. She’s separated from her husband, Mr. Whitaker, whom she had stolen from the narrator. She returns with a two-year-old adopted blonde daughter, Shirley-T. The narrator notes that the girl resembles both sides of the family. The sisters, and the family in general, engage in lots of petty arguing.

On a bright December morning, Phoenix Jackson, an elderly woman, makes her way slowly through a forest. She has a long way to go over difficult terrain. Though there are numerous obstacles and potential dangers, she must continue. Her trip is an important one.